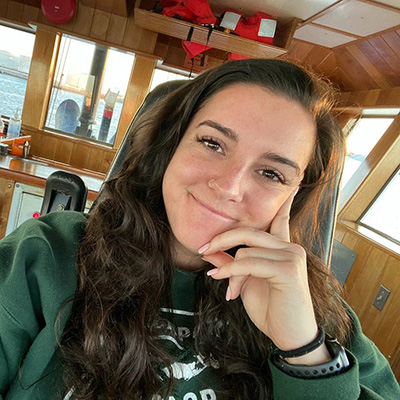 Madeline (Maddy) Thibeault came to G&H Towing four years ago after graduating from King’s Point. “G&H came to my school’s job fair,” said Maddy. “I knew they were very engaged in the Port of Houston—one of the busiest in the nation—and I found it exciting to think about being part of that!”

Maddy joined G&H for the opportunity to work in the Port but also to gain a lot of experience very quickly. “You can’t help but learn and grow quickly at G&H,” she explained. “Other tug companies might do seven jobs a week, but at G&H you might do seven jobs a day. Every day, every job, is different. There are so many different variables to consider that can change from second to second – we’re always figuring out the safest ways to get things done. Also, with so much traffic in the port—from inland barges to container ships, and everything in between—and weather changes, you must be very aware, get good at communicating, and memorize hundreds of docks. Sure, there is down time, or quiet times, but overall, it is always interesting and new.”

Becoming Part of the G&H Family

G&H vessels run on a 7-days on, 7-days off schedule. Vessels are crewed with four to five people and crews can spend up to half a year or more on a boat together. Maddy has been with the same crew now for eight months on the DAVID B. “You definitely become like a family,” Maddy says. “Depending on schedules we celebrate holidays, birthdays, or important events together. We sometimes share meals, but more than anything we look after each other.”

Maddy moved to Texas to join G&H not knowing anyone. “It was pretty scary, and I was really hesitant about making the move,” she said, “but the people at G&H made it very comfortable and welcoming. A female captain at G&H reached out to me to offer me recommendations and support and ended up letting me stay with her while I got my feet on the ground! Four years later, I love living here, and most of my good friends are people I met at or through G&H.”

Maddy’s dad builds and restore yachts, so she grew up on the water. She also has two older cousins who went to maritime colleges. When one of them took her on a tour of King’s Point, she was hooked. Maddy was only one of 30 women in her graduating class of 250 in 2018. “Things are changing in the industry, with more and more women going into maritime,” said Maddy, “But there is still a pretty big gap.” While at King’s Point, Maddy joined two organizations that support women in maritime: Women Offshore and Women on the Water. Women Offshore is a global organization aimed at helping women build their maritime careers through mentorship, professional development resources, connection, and community. Women on the Water is a national organization, with chapters at each of the seven maritime academies across the United States.

The 2022 class at King’s Point started with twice the number of female students than Maddy’s graduating class of just four years ago. With higher numbers of women seeking maritime careers, the demand for mentors is also on the rise. Once the mentee, now the mentor, Maddy is thrilled to provide the same kind of guidance and support she received – especially to women who are interested in a similar career path as hers.

“Being a woman in a male-dominated industry has its own challenges for sure, but I don’t feel like I’ve experienced much of that at G&H. There can be an adjustment for everyone when a woman comes on board. Maybe the crew treads more lightly, or a joke can go badly, that kind of thing. But as we all get down to work and get to know each other, the fact that I’m a woman doesn’t have much to do with it. That isn’t true everywhere, and I feel super lucky to be at G&H.”

Advice for Building a Strong Career

In her role as a mentor the number one piece of advice she offers to new cadets or employees is to be patient. “This can be a hard job, but also very rewarding! I remind new people (especially if it is at G&H) that everyone around them are professionals and no one is trying to give them bad advice. Every one of us has been where they are, so I remind them to listen and to be patient. In six months, it will be them training someone new, and soon enough they’ll be in the seat with the captain and doing it by themselves.”

“G&H is a great place to get your foot in the door in the maritime industry,” Maddy adds. “Whether you are looking to make a lifetime career at G&H (which there are lots of people here that have been with the company for decades) or looking for a solid start, G&H gives you so much experience and opportunity to learn. If you stay here or move on, starting out here will definitely set you up for whatever comes next.”

Maddy accredits her success as a Mate at G&H to her positive attitude, willingness to jump in and learn, and her excellent organizational skills – something she says captains really love about having her onboard! “If I could do anything differently,” she says, “It would only have been to get my license with the TOAR program sooner so that I would have come in qualified to drive the tug. But otherwise, I wouldn’t change a thing.”

G&H Towing’s guiding mission is to be a safe and reliable company, unified in our efforts to deliver excellence through stewardship and integrity.